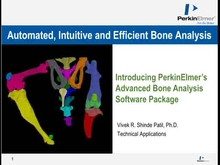 Osteoarthritis (OA) is the most common form of arthritis and affects a considerable portion of the elderly population. In the U.S., it is estimated that more than 630 million people worldwide have this chronic condition, generally in the knees. OA occurs when the cartilage that cushions the ends of bones within the joints gradually deteriorates, causing synovitis and joint deformation.

The goal of OA research is to identify new therapeutic strategies that could prevent, reduce, halt progression, or repair the existing damage to the joint. Non-invasive in vivo imaging such as microCT is the standard modality for bone research due to its ability to obtain high-resolution images at an x-ray dose low enough as not to harm the animal. This makes microCT ideal for monitoring disease progression and response to treatments in the same animal over time. However, microCT data visualization and analysis can be cumbersome and time consuming. In this application note, we compared standard microCT software and advanced bone software to investigate bone erosion in an OA rat model.